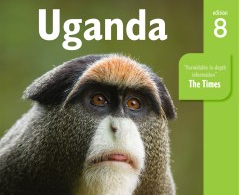 I just finished an incredible month-long backpacking trip around Uganda. Your guide was invaluable for figuring out how to do things independently – thank you! Just have a few updates and report backs to share:

– Bwindi: I tracked gorillas at Ruhija. As far as I could tell it’s virtually impossible to get a truck or matatu from Kabale unless you REALLY know uganda — locals told me they only go every few days, and I asked to confirm whether they followed a market day schedule and got about 10 different answers. Everyone I met in the village said they use hitchhiking as their main mode of transport. I’m sure it’s technically possible by public means but really tough. I ended up arranging a driver there and back plus to/around the gorillas for $100 for three days through Broadbill Forest Camp, Which seemed quite reasonable.

Speaking of which, Broadbill was AWESOME. Can’t say enough good things about these folks. Emmy himself wasn’t there but his staff do an incredible job, with bird watching and chameleon-searching tours included in the price of the rooms.

Lake Mburo: Leopard Tail Rest Camp is now open and was my favorite campsite in Uganda. Gorgeous setting, great food, fair prices ($35 full board camping, and walking safaris starting at $10). As far as I could tell they didn’t have dorms but they have affordable lazy camping for those on a budget without their own gear. It’s reachable by boda from the village of Akageti (I paid 5,000 shillings), Which you can get a matatu to from Mbarara.

Queen Elizabeth: I camped at Irungu Forest Safari Lodge and the facilities were extremely basic. Rooms looked much nicer, but the camping restrooms were pretty abysmal. They also no longer have a full menu at their restaurant, just pricey/poor value set meals (no veggie options even though I told them well in advance that I was vegetarian). And the staff pressured me to give them a good review on TripAdvisor to the point of even asking if they could look over my shoulder when I wrote it (I refused…). They got me a great driver for the park though and I enjoyed their outside the park boat trip (we got extremely lucky with two herds of elephants coming to drink right next to the boat).

Bigodi: there are now about 40 copycats of the Bigodi Swamp Walk— some even several kilometers before Bigodi. Call the guides in advance and they’ll meet you to ensure you end up in the right place. The boda drivers from closer to fort portal seem clueless as to which one is which. Also, Eco burrito is closed. The hot spot in town seems to be The Beehive, which looked obnoxiously pretentious and expensive, but a bunch of the chapati stalls sell full meals for cheap if you can’t get a space at Tinka’s Homestay for lunch.

Toro Crater Lakes: I camped at Chimpanzee Forest Guesthouse (gorgeous spot). A boda from fort portal cost me 10,000 and only took about 20 mins. The road is really good all the way to Bigodi, but public transport is still quite infrequent and unreliable. If walking in the area on the road or the paths around the lakes, beware of aggressive baboons. The lake (Nyabukere) also now has a pair of hippos who wander into lakefront camps at night.

The road between Fort Portal and Kasese is a total mess. It took 5 hours on Link Bus. Looks like they’re working on it, so hopefully the mess is temporary.

Jinja: the dreaded dam is complete and some of the most famous rapids are submerged, but it was still a pretty great day on the river. I rafted with Nalubale and I’ve never felt safer (I’ve rafted in the US and several other places before). Their camp in Bujagali was nice, but weirdly deserted. The whole area had kind of a creepy ghost town feel and walking around the village was the only place in Uganda I felt even remotely uncomfortable as a solo woman when a couple drunk guys started giving me a hard time, following me, grabbing my arms, and wouldn’t back off even when I went to my camp. My discomfort was probably heightened by my own knowledge/paranoia that I was staying in a tent pitched a hundred meters away from the reception and was the only camper, so take it with a grain of salt. In a more positive note, lots of love for both The Deli and The Source Cafe in town — both great suggestions for the burned-out-on-Rolex vegetarian traveler!

Sipi: I stayed at sipi river lodge. Their coffee tour was amazing! Shared taxis have largely replaced matatus and I only waited 5 mins for one to leave. When departing sipi, catch a boda to the junction at the bottom of the mountain, where you can get frequent transport back to Mbale (boda + matatu cost me 10,000 shillings; I waited 5 mins for a matatu on a sunday morning). This avoids the problem of most shared taxis to Mbale being full before they reach sipi. Tell your boda driver to go very slowly on this windy, narrow mountain road — and then tell him again, and maybe a third time. The truck traffic is mildly terrifying.

Mbale: there are several nightly buses to Nairobi that use the border crossing near Tororo. Easy Coach has them, but Mash Bus’s bus was nicer and They arrive in a slightly less dodgy corner of the River Road area in Nairobi. I paid 1,200 Kenyan shillings ($12 USD). Departures between 5 and 6 pm. Border crossing takes 3+ hours — they only have one immigration officer working on each side. But This was way easier than doing the trip in stages via Busia or doubling back to Jinja if traveling in the Mount Elgon region.

That’s all I’ve got! Overall I completely fell in love with uganda — this was one of the best trips I’ve ever taken. I’d highly recommend forgoing the driver/guide and traveling independently for anyone with a sense of adventure and patience. It’s cheap, easy, and I literally couldn’t get off a matatu without about 8 new friends’ contact info and pages of recommendations for the rest of my trip.

Also can’t say enough how much I appreciate how easy it was and how safe I felt as a solo 30 yr old, 5 foot 4, 120 pound blonde woman. This was my fifth trip and eighth country in Africa and aside from the north, I’ve generally found it very easy, but Uganda was a level of hassle-free that tops the rest. Aside from Bujagali, I didn’t have a single unpleasant or even mildly annoying interaction with a Ugandan man. Uganda is awesome!!